Newbery Aftermath and Checking In on my New Year's Resolutions

Cross-posted from the Blue Rose Girls!

First of all, I added a few pictures to my ALA Midwinter post when I cross-posted it on my personal blog. Check it out here.

And here's a picture of what I came into my office to see after the news was announced. My assistant made the huge medal to adorn the book (the Al Roker is from another coworker after we found out the book would be Al Roker's Book Club pick on the Today show, and the stars are for the starred reviews the book received). The beautiful flowers are from my Publisher. They smelled fantastic, too. 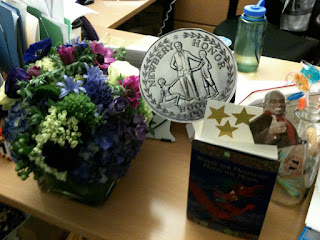 I'm still basking in the news of Grace's Newbery Honor, and I can't express enough my gratitude to the Newbery Committee who recognized Where the Mountain Meets the Moon. As I mentioned in my post, as an editor, it is my dream to acquire and edit a book that becomes a classic. Of course, a Newbery Honor, or even a Newbery Medal, does not ensure that a book will become a classic, but it sure the heck doesn't hurt! Grace, your books are all classics in my book.

So, now that we're over three weeks into 2010 (not a bad year so far, I must say!), and I thought I'd check to see how I'm doing on my work resolutions.

1) Learn how to say "no" more.
Yes! I turned down at least two conference invites this year already, as well as a few requests for meetings.

2) Stop counting on weekend and vacations and holidays to "catch up" on work.
I'm sorry to say that I haven't kept this up. In fact, I went into the office both days this past weekend. Then again, I didn't feel bad about it. I enjoyed the work I accomplished.

3) Don't stay at the office past 9 pm.
Yes! I think two days this year I stayed till just before 9 pm, but overall I've managed to leave the office at a decent time each evening.

4) Work towards "Inbox Zero"--I think this is probably too lofty a goal, so to be a little more realistic, I'd like to have under 20 emails in my inbox by the end of each day (Let's call it Inbox Twenty).
Yes! I'm the most amazed that I've been able to keep this up. The closest call was the first Monday back at work after the break, because I was dealing with weeks of emails that had piled up over my vacation. As 8 pm passed, I realized that resolution #3 would at times be in direct competition with #4...but for now, both resolutions have been achieved.

5) While at work, work. Less socializing and web surfing.
Yes! Limiting Facebook and Twitter use while at work has worked wonders. I should probably cut out Gawker, too, though.

6) Acquire at least two picture books, two middle grade, and two young adult projects this year.
I'm working on it! Just finalized a two-book deal for two YA novels--more on that after the deal is announced. Also have a three-book middle grade deal in the works...

8) Tidy my office at least a little bit once a week.
Ummm....maybe?

How are you all doing with your resolutions so far?
Posted by alvinaling at 11:21 PM

i had a revolution against resolutions so I didnt make any :)