The Oughts: A Look Back

Earlier this year, when I looked back ten years ago to when I first started my career in publishing, I hadn't realized that we were also nearing the end of the decade and the beginning of a new one (although...technically 2011 is the beginning of the new decade, right? Details, details!).

-I spent most of The Oughts not eating candy. I'm not sure exactly when I made that New Year's Resolution to not eat candy (I'd look back in my diaries to check, but am on the road right now! I'm literally up in the air on the airplane, to be exact), but it was at least eight years ago, because I know I was still living in Boston. Wow. Almost a decade of barely any candy!

-I've spent all of this decade working in children's book publishing and loving it. I went from being an editorial assistant to a senior editor (with a few steps in between).

-I moved to New York from Boston.

-I survived a traumatic break-up and an eviction.

-I dated people I met online, met at parties, met at bars, met while sharing a taxi, even!

-I met The Randoms: my "new" group of friends who I've now known for almost five years.

-I went to countless weddings, two funerals, visited friends and families with babies (distributing kid's books along the way).

-I edited two books that were New York Times bestsellers, one Golden Kite winner and one honor, an Edgar Award winner, an Al Roker Book Club pick...and more! I love and am proud of each and every book I've acquired and edited. And I'll always remember my first!

-I took tens of thousands of photos, including hundreds of food.

-I continued my obsession with Karaoke.

-I learned about the Asian woman - gay man stereotype.

-I ran one marathon, four half marathons, played softball on the company team (the Catchers in the Rye), and biked a bunch.

-some of the technology that changed my life (for the better. Well, for the most part): cell phones, instant messaging, Sony Reader, iPod, gmail, hopstop.com, iPhone, digital cameras, flickr, animoto, podcasts, MacBook, etsy.com.

-I got the bulk of my news from Jon Stewart, podcasts, Twitter, and the internet.

-I voted in two presidential elections, and witnessed the U.S. elect our first black president.

-I went from being in my mid-twenties to mid-thirties. In other words, I became an adult. Almost.

-And, of course, I started blogging! I became a Blue Rose Girl, and blogged about bloomabilities.

What are some of the events that have defined this decade for you?

Happy New Year, everyone!
Posted by alvinaling at 9:14 PM 8 comments: Links to this post

Re-posted from the Blue Rose Girls.

I'm on vacation, at my parents' home in Southern California for the holidays. I made it out of New York on the last non-canceled flight to Los Angeles Saturday afternoon during the snow storm! Speaking of the storm, I was actually a teeny tiny bit sad to have escaped, because I really love snow, and there's something so special about the first big snow of the season. But I was happy to live vicariously (whil in 70 degree weather) via lots of photos and videos online. Here's my favorite:

This year really flew by. I'll try to do a proper wrap-up in the next few weeks, but today I'll direct you to agent Nathan Bransford's great "Year in Publishing" post.

And here's a recent article about a business practice in publishing that nobody talks about. In fact, I know very little about how this works and found the article fascinating myself.

I was a guest blogger over at the Debutante Ball last week, and posted about research--how I researched to find my dream publishing job, that is! Read it here.

Also, related to Meghan's post about eBooks, this is an interesting article about an experiment regarding the issue of DRM, or digital rights management.

And finally, in honor of the sad news that actress Brittany Murphy died over the weekend, and also the recent news of Kirkus's demise, I was reminded of my post from this past May about Bad Reviews, which referenced both subjects (albeit somewhat indirectly). And will add that despite my negative feelings towards some of the reviews in Kirkus, I was saddened by the news. It really is a loss to publishing. You can read more thoughts about this over at the Horn Book blog. 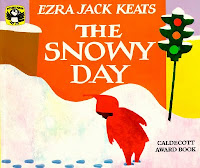 And to conclude this random post, let's get back to snow. Anyone who knows me well knows that my favorite snow book, which is also my favorite picture book of all time, is The Snowy Day by Ezra Jack Keats. Other snow books I love are Robert's Snow by Grace Lin, and Uri Shulevitz's Snow.

What are some of your favorite snow books?

Happy Holidays, everyone!!
Posted by alvinaling at 1:16 PM 3 comments: Links to this post

Email ThisBlogThis!Share to TwitterShare to FacebookShare to Pinterest
Labels: recommendation

Reposted from the Blue Rose Girls.


Here are a few pictures from Grace's appearance on The Today Show last Friday.

When I showed up at the studio, Grace was getting her makeup done in the green room. I took this short video by mistake before someone told me that photos weren't allowed in the area:


Grace met the book club kids beforehand--but they were under strict orders to not talk about the book (although signing books was allowed): 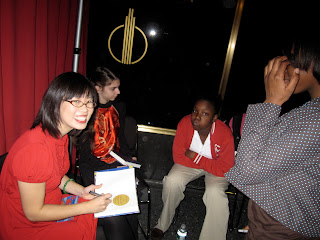 Lining up to go up to the taping: 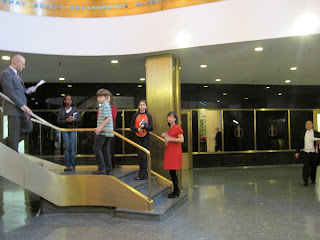 I watched the show from the green room (there was a nice spread of food and coffee for all of us): 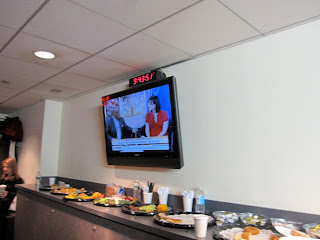 Afterwards we took a group picture: 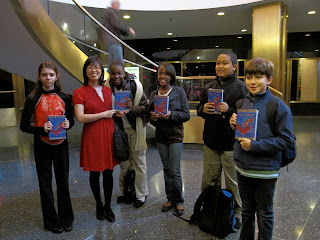 And here are Ames O'Neill (Grace's publicist at L,B), me, Grace, and her agent Rebecca Sherman: 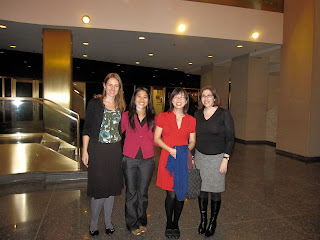 Grace was great, wasn't she? I imagine she will have more to share on Wednesday.

Two more tidbits. I'd like to direct you to a thorough and insightful post by agent Michael Sterns over at the Upstart Crow Literary Agency blog. Food for thought for picture book authors.

And finally, this video kind of blew my mind. Will this be the future of magazines and books?