So, I haven't been posting anywhere for a while, and I've decided that I'm going to stick to Blogger instead of friendster. I hope all of you who used to read my posts there will now visit me here.

I found out this week that I got a bid into the NYC Marathon. I had entered the lottery and found out a few weeks ago that I didn't get in, and even though I had been half hoping for just that, that I wouldn't get in so I wouldn't have to train, I was disappointed. You know how when you decide to flip a coin to help you decide something, and then the coin tells you to do one thing, and you realize that what you really wanted was the other thing? This was like that. So I looked into running for a charity, something that I would have done anyway if I had gotten in, and signed up with Fred's Team to raise money for pediatric cancer research. They didn't have any more guaranteed slots, though, so I had to wait to see if more space opened up, and then on Monday I got an email with the subject heading: Congratulations! and sure enough, I had a slot.

So...it hasn't really sunk in yet, except that I keep telling myself that I have to start running more--I haven't run more than 5 miles since I did the 10 mile Cherry Blossom Race in DC on April 2. So I decided to go running last night. At first I thought I'd start by running 5 miles. But it was a beautiful summer solstice night, perfect running weather, and once I got to McCarren Track in Greenpoint where I sometimes run, I decided I would run 26 laps to represent the 26 miles I'd be running in November. I like to be all symbolic and sh*t.

Running is such a mind game. Sometimes 1 mile seems like nothing, sometimes it takes forever. After 6 laps I was despairing at whether I'd finish, but by 13 laps I felt like I could run forever. The Park was the most crowded I've seen it, and I was constantly dodging soccer balls (kicked three last night) and little kids zooming around every which way on bikes and scooters. Sachin ran a few laps with me and compared it to a video game. But anyway, I finished the 26 laps and felt great. Of course, it's daunting to think that I only ran a quarter marathon, and I'd have to run 104 laps to run the distance of a full marathon! This is why I don't prefer to run on a track for long distances. Counting laps is so much more of a task than counting miles. Or just doing one lap in Central Park.

I have to thank my roommate Rose for inspiring me to run. She reminded me that it was at 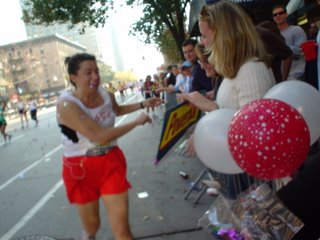 brunch with my father, Lisa, and Rose that I decided I would enter the lottery, and if I made it in, that would decide for me. Before last year, I've never had even an inkling of desire to run a marathon. I've had other friends run, and I've always thought, no way, 26 miles? And watching Rose train last year definitely didn't make me want to run. It was just watching the marathon and watching Rose run, seeing the people in pain but trudging on, seeing the people who were exuberant, smiling, having fun, cheering everyone on, and feeling the electricity of the moment. I wanted to be a part of that.

So, more running posts are to come! Happy summer, everyone.
Posted by alvinaling at 1:45 PM

Wahoo! Running a marathon. I'm very impressed.
And, lovely new blogspot. Is there a way to subscribe to this blog, so it sends an email when you update?

ahhh...uhh...I don't know. I think there's a way I can set up a feed or something that you could subscribe to, but I'll have to do some research. In the meantime, just for you, I'll email you when I post!