I'm a half marathoner! 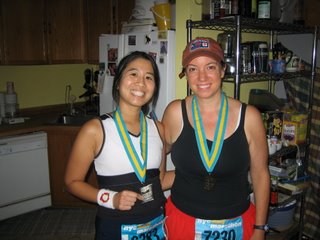 I ran the half marathon yesterday morning, and actually felt great doing it.

I went to bed early the night before, although I didn't sleep well--kept waking up at every little noise, I think partially because I was excited and nervous. But I still slept enough, woke up at 5 am and had a bagel with peanut butter and honey, and then walked over to the start with my roommate Rose. We ran together most of the way, which was great--we didn't talk much, but just knowing she was there pushed me to run faster (and vice versa, she said, for her). And run fast (for me), I did indeed. I finished with an average of 10 minute 23 second miles--I was hoping for 11-minute miles. It's funny--for running, I tend to set very conservative but realistic goals, I'm not sure why. I think I don't like to put undo pressure on myself, when the main goal is to just finish the damn race.

It was the perfect running temperature--upper 60s and overcast. But it was humid, and the skies threated rain--we felt the stray drop here and there before the race. I thought the humidity was good for me, though--kept my throat hydrated. I felt really good running the first 6 miles, hills and all. I usually run the Park counterclockwise, so it was fun running the opposite way.

Around mile 7 we heard rattling in the leaves, and sure enough, seconds later the downpour started. It was cold, hard rain, and after a few seconds of it I said to Rose, "Well, at least it's an experience." It made me run faster. But I despaired that it would rain the whole rest of the race, and I didn't know if I could bear it. I had to keep my head down because the rain kept getting in my eyes, and I was freezing cold. Thankfully, the rain tapered off about a mile later, soon after we left the park and headed down 7th Avenue. It was awesome running though Times Square, the road was wide open, and then to the West Side highway. I had a 12-minute mile around mile 8, and sped up for the next mile and ran it under 9 minutes, which for me is unheard of. But other than that I was solidly running around 1o minute and 3o second miles. I felt like walking around mile 10, but knew there was only 3 miles left, and I also knew that every step I took was the farthest I'd ever run in my life, and that was exciting.

Took the last 3 miles at a slower but steady rate, and then still had something in me to speed up for the last 800 meters, finishing at almost a sprint. Awesome. And hey, I got a medal! I haven't gotten a medal for anything since the science fair in high school.

The people cheering on the sideline were great and really helped. There were also string quartets and bands along the way, and that was a good distraction. And, of course, NY in general. It was a great route, and I'd love to do it every year.

I'm a little sore and tired today, but overall I'm feeling good. And happy. Bring on the full marathon!!
Posted by alvinaling at 12:04 AM

WOW! Congrats, such an accomplishment!!!

Terrific! Impressive! Fun to read the description of the event and your progress through the course.

The only remotely similar thing that I have done is participate in the roller blading marathon in Duluth, Minnesota. We were cheered on by locals in lawn chairs ringing cow bells. I finished (which was an accomplishment for me) but so far towards the end that the local emergency crew kept asking if we (my cousin and I) were okay.

Kudos to you and Rose!

Just reading this entry made me tired, I can't imagine running more than 4 miles, really. You are SO ready for the big one!

That is AWESOME and you rock! I can't even remember ever running an entire mile. You are my new hero. I need to start running. I probably should deal with the whole exercise-induced asthma thing first, but there's always inhalers for that. HAHA!

Congrats on running the race! That must have been a fantastic experience. The closest I ever come to running, is running out for a burger. Hmmm I hear my nordic-track snickering now.

Congrats on the medal too!
Lisa Albert

Thanks, Everyone! I'm not so sore today, which is good. And there were some people with cowbells on the sidelines, and they were great! I celebrated with a big brunch with all-you-can-drink bloody marys, followed by a 2 1/2 hour nap, and then had a decadent dessert at Cafe Mozart, so I'm sure I undid all the calories I burned, but it was worth it.

though I must admit that I have NEVER wanted to run a marathon, not even before my knees went. Though I have admiration for anyone who runs a half (or even a quarter) of one.

CONGRATS!! All that hard work training, and now you have something to show for it! Man, I haven't done cardio in like a year. Maybe I'll accompany you on one of your runs when I visit soon! ...or maybe not

Thanks, thanks, everyone! And Jane, thanks for visiting. I had absolutely no desire to run a marathon either--it wasn't until watching my roommate run last year that I started thinking about it, but now I'm totally psyched! Ben, want to do a 15 mile run with me while you're in NY? Ha.

Visiting? Visiting? I have been a secret lurker for a while, ever since SCBWI I think.