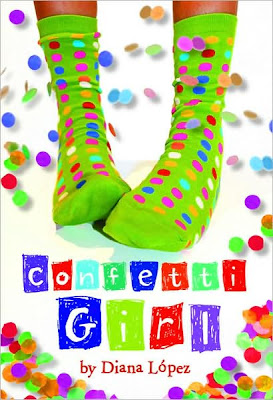 Confetti Girl was submitted to me by agent Stefanie von Borstel of Full Circle Literary after we had met at a conference. I had mentioned that I was looking for more multicultural projects, both projects that had very much to do with cultural identity, and other projects that featured main characters of color, but of which their ethnicity was not the main focus in terms of the story and plot. I had given her a copy of The Year of the Dog as an example of the latter, and she told me she had the perfect novel to send me.

Apolonia "Lina" Flores is a sock enthusiast, a volleyball player, a science lover, and a girl who's just looking for answers. Even though her house is crammed full of books (her dad's a bibliophile), she's having trouble figuring out some very big questions, like why her dad seems to care about books more than her, why her best friend's divorced mom is obsessed with making cascarones (hollowed eggshells filled with colorful confetti), and, most of all, why her mom died last year. Like colors in a cascarone, Lina's life is a rainbow of people, interests, and unexpected changes.

As I often mention, I need to make sure I love a book enough to want to "marry" it before I acquire it. After all, if we take on a project, we have to read it over and over at many different stages, to be wed to it for its lifetime. And so we have to make sure that we’re willing to commit completely, heart and soul, to a project.

As soon as I finished reading the first draft of Confetti Girl, I knew I wanted to marry it. Sure, I wanted to work with the author to make the novel even better, but the great thing about marrying a novel as opposed to a person is that you truly can make changes (a person might not be as open to changing!).

However, I also knew that it wasn't quite ready for our acquisitions meeting. My main issue was that it was stuck between the Middle Grade and Young Adult age groups, and I thought it should be younger, solidly middle grade. Thankfully, Diana and Stefanie agreed to revise the novel before a contract, and I sent over an editorial letter. She actually ended up revising the novel twice before I brought it to the acquisitions meeting, as the first revision was still not quite there, but close.

And throughout every stage of the process, I was always delighted with how much I loved this book in all of its manifestations. Diana’s voice is so lovely and sweet, and as clichéd as it sounds, this book truly made me laugh and cry.

Thankfully, my acquisitions committee loved the novel, too, and a year and two months after the first draft was submitted to me, I was able to offer Diana a contract. I'm so thrilled that it is finally out in the world (it pubbed at the beginning of this month).

A note on the cover: this is the first novel designed by our fantastic senior art director Patti Ann Harris, who specializes in picture book and novelty books. And I think she's done an absolutely fantastic job and perfectly captured the joy and flavor of the book. We hesitated a bit to put socks on the cover, as there have been a few similar designs on books recently, but in the end, it was just so perfect for the novel (Lina is a "sockiophile" after all!) that we went with it. Patti Ann did a photoshoot in the office, and the feet on the cover belong to one of my editor colleagues! We sent the socks to Diana when we were done:

Diana is a Texan native and taught middle school there for nine years, and she has perfectly captured that setting and age group. Her characters are quirky and real, and every time I read her book, I marvel at how simply charming and engaging her writing is.

Happily, the book has only received glowing reviews thus far:

"The story is saturated with Spanish traditions, such as the making of "cascarones" (confetti-filled eggs), and the chapters begin with "dichos," truisms that help Lina feel connected to her mother. Employing lovely metaphors and realistic dialogue, adult author López (Sofia's Saints) delicately displays the power of optimism and innovation during difficult times."
--Publisher’s Weekly

I absolutely knew from the start that this was both an author and novel that was extremely special, and I hope you all agree!

Read more about Diana and Confetti Girl on her website and this great interview over at Cynsations.
Posted by alvinaling at 9:42 AM No comments:

An Iowa adventure in pictures and videos, Part 1

Find out what happens when we enter this road: 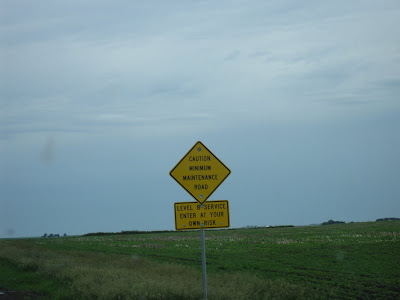 (the sign says CAUTION MINIMUM MAINTENANCE ROAD, LEVEL B SERVICE, ENTER AT YOUR OWN RISK) 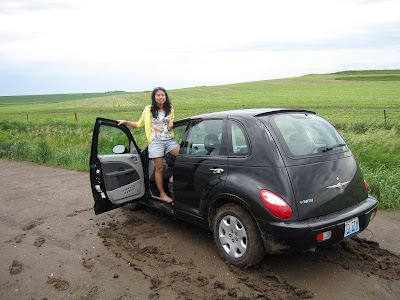 An animoto video in honor of my amazing dad. Happy Father's Day!
Posted by alvinaling at 2:03 PM 2 comments: