Yes, we're silly. During our office Halloween party last year, I decided we should take advantage of our costumes and film a few impromptu book trailers. First, here's one for SHARK VS. TRAIN by Chris Barton and Tom Lichtenheld.

voiceover: Connie Hsu
Shark: Alvina Ling (aka, the editor of the book)
Train: Maria Mercado (aka the designer of the book)

And here's one for HAPPYFACE by Stephen Emond


Singer: Alvina Ling
Happyface: Connie Hsu (aka, the editor of the book)

And here are our costumes: 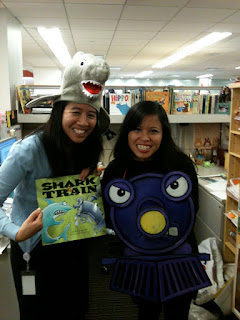 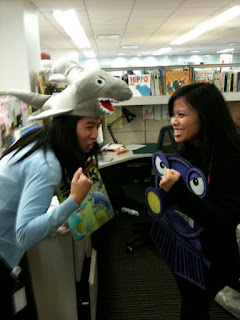 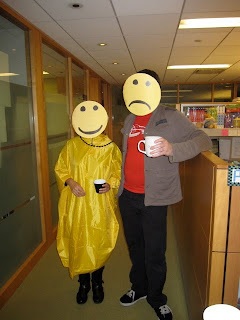 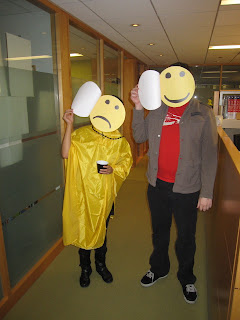 (2nd Happyface is the designer of the book, Ben Mautner)
Posted by alvinaling at 9:03 AM 1 comment:

I am Taiwanese American

All my life, my parents told me "If anyone asks, you're Taiwanese. Not Chinese. It's different." As a child I would dutifully comply, even though I didn't completely understand the distinction. In high school, one of my friends would tell me that I was Chinese American, like her. And when I disagreed, we would argue about it, no doubt just spouting our parents' political beliefs.

Well, I now understand the difference (especially after having lived in Taiwan for over a year after college), and yes, there is a difference. And yes, some of it is politically-based. To a certain extent, it comes down to whether or not you believe that Taiwan is an independent country, not a renegade province belonging to China. I believe that Taiwan is (and should be recognized as such) its own nation. Taiwan is a democracy. It has its own political system, its own president, its own economy, industry, and foods and culture. It's a tropical island country. Are many aspects of the culture similar to Chinese culture? Of course, but there are also so many differences: the food (oyster pancakes! Smelly tofu! Bubble tea! Bah-zang!), the language (although Mandarin is now the official dialect in Taiwan, the Taiwanese dialect is very different), and especially the way the people there think (as you can expect, someone growing up in a democracy that encourages freedom of speech and thought will be much different from one growing up in a Communist country with censorship. Also, Taiwan had been occupied in the past by both the Dutch and the Japanese, and there are influences from both in the Taiwanese culture today). Taiwan has been separate from the mainland for over 200 years. And all of this was especially apparent to me when I visited China two years ago and realized the extent of the differences.

Anyway, I don't want to go on and on. I simply wanted to share this marvelous video. To my delight and surprise (they hadn't told me they were doing this), my younger brother, parents, and aunt and uncle are all featured! Can you guess which ones they are?

(Need a hint? Check this link out.)

I am Taiwanese American!
Posted by alvinaling at 7:32 AM 7 comments: