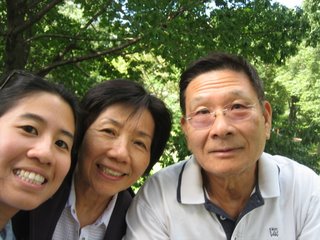 I knew they had met in NYC at a Taiwanese singles Christmas party.

My father was looking for a wife. He knew he wanted to marry a fellow Taiwanese, and he wanted her to be strong, independent, and smart. And she had to believe in Taiwan independence, too. He was living in Atlanta, Georgia at the time, but friends recommended that he go to NYC to look, so he did. His plan at this Christmas party was to dance with every woman there, rank them in order of preference, and then starting from his top choice, work down the list and ask each woman out until one of them said yes.

"What number was mom ranked?" we asked him when we were kids.

As a child, I had always pictured a Jane Austen-esque party of hundreds of people, fancy gowns, and formal ballroom dancing, and wondered how my father managed to dance with every woman there. But of course in reality it was a smallish party, with 10-12 women.

What I knew: they met, three months later got engaged, three months after that they were married. And they're still married today, over 36 years later.

What I didn't know until their visit this past week: they got engaged on a rock in Central Park.

On Labor Day Monday, my parents and I walked from my apartment to Central Park on a beautiful, mild summer day. Our destination was my office, and then lunch, then the MoMA. My mother told me to take my usual route, but we took a few detours, checking out the remote-control sailboats, the Alice in Wonderland Statue, Bethesda fountain. Then we walked through the Mall, and tried to find the rock that my father had proposed on so many years ago. They didn't know exactly where the rock was, but they knew that it was near the street, because they had gone to the Park after a dentist appointment that my mother had. Of course, she didn't remember where her dentist's office was, but I guessed it was South of the park. My father went to a cluster of big rocks off the Mall, but my mother didn't think that was right. Then I took them to the rocks above the Trump ice-skating rink, and my father said it seemed right. My mother wasn't convinced, but they sat down on the rock next to each other, and she seemed content to believe. 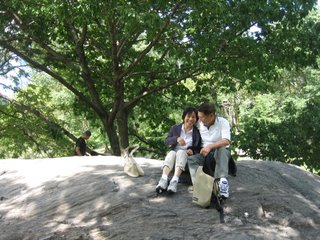 Thanks Alvina. Your parent's story really brightened my day. What a nice thing to be revealed to you in such a casual way.

That is so sweet and heart-warming. I love it.

It really made me smile, especially because exactly 13 years ago, my husband proposed to me while we sat on a big rock as well (on a beach in the West Indies). And exactly 10 years ago (this week) we got married. Rocks are the hippest and luckiest places to propose, I guess!

Thanks for the cheery story!

That's a truly rocking story. Thanks for blogging about it.

That's a wonderful story. I love the little stories we know about our family -- the ones that make them so much more individual and real.

No wonder you're such a secure girl ... your parents built their house upon the rock ...

Ha, I didn't know that either.

Then again, I hardly know any of the stories anyway.

Great story. I forwarded to a few friends.

I love this story. Thank you!