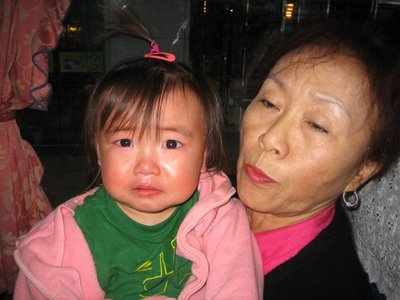 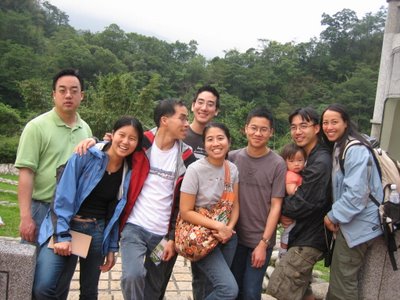 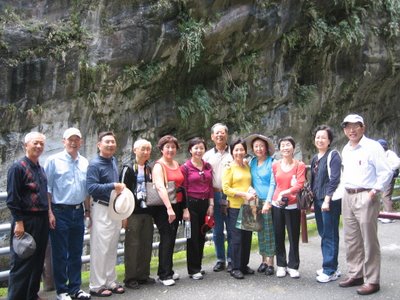 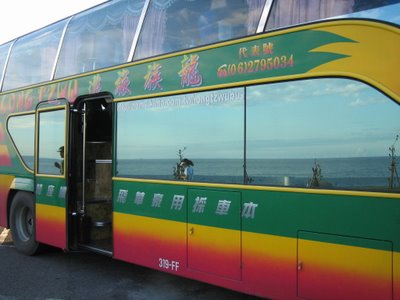 our crazy tour bus: home for a week 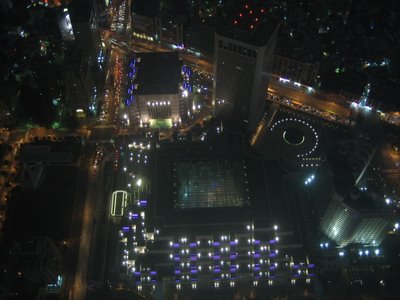 the view from the top of Taipei 101 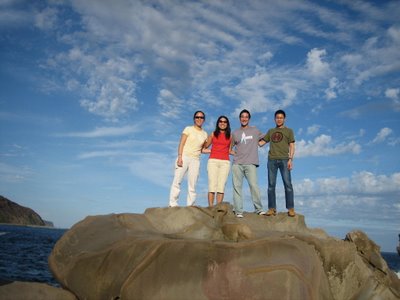 Cousin JoAnn, me, Ben, and cousin Rich
I'm back from Taiwan! I got back late Tuesday night, but managed to stay awake during the majority of my flight, so was able to fall asleep after I got home and slept soundly till 8 am. It was a good trip. Not great, but good. I'm not sure it was quite the vacation I needed at the time, because it was overscheduled and not very relaxing. But it was still fun.

I arrived in Taiwan on Sunday morning, met some of my relatives at the airport who also arrived that morning, then was off the the hotel where the rest of my relatives were staying, got on the tour bus, and was off. It seemed that every minute of the tour was scheduled. Wake up call at 7. Breakfast at 7:30. Load the bus at 8:30. We were at a different hotel every night, so each morning we had to pack up all of our luggage and go. But it was a good way to see the whole island, and bus time was time to catch up with relatives I hadn't seen in a while, nap, play cards (Taiwanese poker, hearts, gin), video games (Bust a Move!), eat snacks, watch movies--some good (Princess Bride! Snakes on a Plane!), some bad (Snakes on a Plane!), some pirated (Snakes on a Plane!). We made plenty of restroom stops at these tourist traps where the same assortment of snacks and knicknacks were on display, and the vendors called out to us as we walked by "Ni hao! Ni cong nali lai?" (Hello! Where are you from?) Most people guessed that I was from Singapore or Malaysia. It seemed that a few aunts bought some kind of snack at each stop, and once we got back on the bus, the bags of snacks would be passed around--always something different. Mochi, sesame candy, mooncakes, crackers, oranges, etc. My cousin Andrew bought a different milk tea or coffee project at every convenience store we passed. I got a papaya milk from 7-11 and BBQ ribs-flavored Ruffles. We saw a dam, waterfalls, a gorge, swam in hot springs, played ping pong, pool, video games, worked out, watched HBO in hotel rooms, went to night markets, shopped, went to museums, Tsunah, an Aborigine village, Taoyuan, Hualian, Kenting, Tainan, Taichung, Taipei. It was a packed trip, to be sure. The food was the best part. Breakfast buffets at the hotel every morning--congee every day! We didn't have a Thanksgiving dinner, but we did pig out at a fancy buffet dinner in Tainan.

Things I learned on this trip that I never knew before:

1) The crease I've always had on my arm, about an inch above my inner elbow, is apparently a sign of aborigine blood. My mother also has the mark, and said that when she was younger her classmates would tease her about it. It wasn't desirable to have aborigine blood. My father and younger brother do not have the mark. Not sure about my older brother. My mother said that my father's nose is a sign of Dutch blood.

2) When my mother told her mother that she was engaged, my grandmother was worried, because she had not yet met my father (since they had gotten engaged so quickly). So she asked my mother where my father went to college, and then called some friends/professors she knew there to check up on him, see if he was a good guy, check his transcripts. Everything confirmed that he was not bad, so she approved of the match.

3) I remember both more and less Chinese than I thought.

4) Ben can read on buses and cars--I had thought that he got carsick like me.

5) There is a Thai instrument that was made from human femur bones, traditionally made from people who have died violent deaths.

6) The Taiwanese Atayal aborigine people used to have a tradition of head hunting and tattooing. 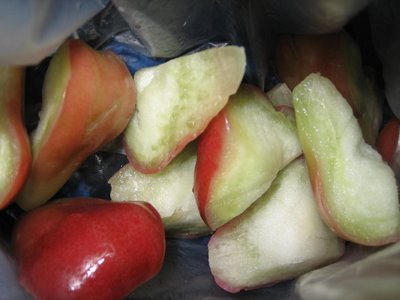 wax apples
9) It seems that Taiwanese Americans look younger than the Taiwanese who grew up in Taiwan, at least in my family.

10) Distant cousins who live in Taiwan have read my blog, particularly my Love Story post and Marathon post.

11) One (or more) of my aunts is obsessed with marriage, and doesn't think women can be happy if they don't get married. She also thinks that whiter skin is prettier than dark skin, and thinks I'm lighter now than I was nine years ago when I lived in Taiwan. She can't understand why I'm not married. 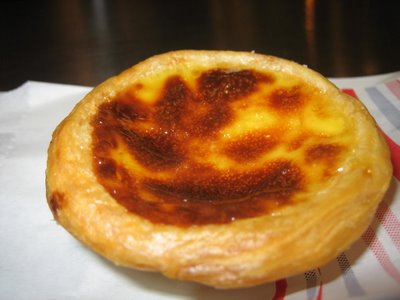 banana egg custard from KFC
14) My family has a temple that honors our ancestors called the Hwang family temple, and my mother's relatives who maintain it own a golf ball company 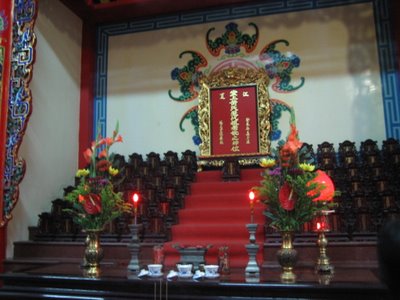 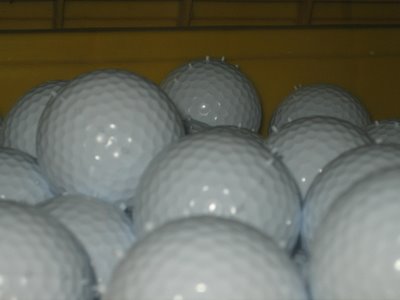 golf balls
That's all I have for now. At any rate, it's good to be back. I always love coming back to New York after vacation--a sure sign to me that I consider New York to be home.

I haven't really been jetlagged much--I've been getting a bit tired in the afternoon, but not horribly so. I hope I can fend it off. I'll try to post some pictures tomorrow--I took over 400 of them. Now it's time for bed!
Posted by alvinaling at 8:20 PM

glad to hear that the trip was a good one! from the emails that Elena sent out before the trip, it sounded like a packed schedule.

still hope to one day make it out there.

The crease I've always had on my arm, about an inch above my inner elbow, is apparently a sign of aborigine blood... Not sure about my older brother.

It seems that Taiwanese Americans look younger than the Taiwanese who grew up in Taiwan, at least in my family.

Anyway, glad you had a good trip. Looking forward to the pictures!

I played Bust a Move the last time I went to Taiwan, too. My favorite character is Frida (the reggae girl with the blue ponytail).

I'm glad you had a good time!

OH MY GOODNESS! I HATE seeing the commercials for the bestselling "Fair and Lovely" lotion on Indian television. Gobs of that foul, skin-lightening product are sold in the Indian shops here in the States, too. Always the comments about the color of skin ... this is one of my biggest gripes about being South Asian. Welcome back!

kong xing cai is out of season here! i'm so sad.

Thanks for posting the picture of your family shrine. No portraits like ours. I want to post a photo of ours (and gravesite)on my blog, but the family says it's not such a good idea. I think it's just a family thing. I've seen photos of Japanese family altars in other places...I'm enjoying your blog. The matter of skin color reminds me of Baba being happy that our son was dark. Our daughter was very fair. Baba said it is good for boys to be dark. This is all family history. annie

my roommate's gallery did a show earlier this year of all these hyper-realistic golf paintings and a golf course installation. according to the spiel the director & owner gave to some foreigners who bought a couple of the pieces, the artist was making a statement about the new moneyed class in china, who aspire to emulate the west & do things like play golf. there are also these fancy private kindergartens rich chinese send their kids to where these kindergarteners take golf classes and stuff.

Crazy... The weather is so hot here (in northern Argentina) I started craving wax apples insanely yesterday! But of course I've never had them outside Taiwan.

Grr. Now I can't stop thinking about it.

Btw, which Bust a Move did you play?? I love the dance game, but the Tetris-like one is my evil addiction! (These are pretty much the only two video games I play at all, and they have the same name!)

They put a version of it up at the Charlotte's Web website earlier this year ("Barn Break"), and I accidentally played so long, I got on the scoreboard. Now THAT is a first.

I was searching "Taiwanese with Dutch blood" on google and randomly came across your blog. It's interesting what you said about that crease like an inch above the inside elbow. I have that crease too and I was told that I have aboriginal blood when I went to Taiwan 2 summers ago. This is actually quite interesting. Do you by chance know why that crease is there?

Rita--the tetris-like one with the bubbles and funny sounds. Love it.

As for the crease, no idea. Since coming back from Taiwan, it seems that a lot of people have the crease, so who knows what it really represents, if anything. It's interesting, though--especially since you've confirmed that you have aboriginal blood, plus the crease. Hmmm.