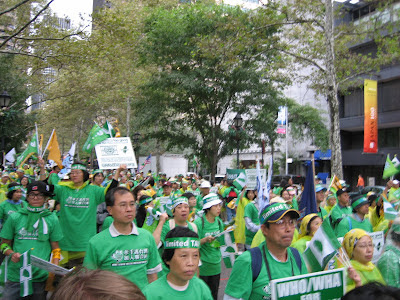 Last Saturday, September 15, hundred of thousands of people rallied around the world to support Taiwan's bid for UN membership. I participated in the peace rally in NYC across from the UN (although I wasn't able to stay for the march).

There were a lot of people there despite the early hour and threatening rain. Everyone was festive and friendly, excited. The speakers energized the crowd--it was hard to judge how many people were there, but I'd guess 500-1,000, some of them having traveled from far and wide, some caravaning together on buses, to be there. There was even a performance of John Lennon's Imagine. I wore my "Dai wan lang" (Taiwanese) T-shirt, waved green flags, and chanted "UN for Taiwan! UN for Taiwan!" 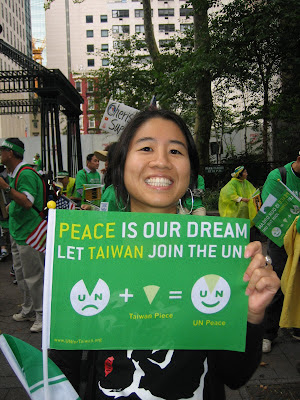 I'm not an overly political person (although I of course do have certain strong beliefs), but I do think that Taiwan is rightfully an independent, sovereign country--it's a democracy, has it's own president and political system, and is so separate from China in almost every way. Unfortunately, the UN rejected the membership bid. I don't know when/if Taiwan will ever win their bid, but I know they will keep trying, and I applaud everyone's efforts.

You can read more about the rally and the politics behind it here and here. 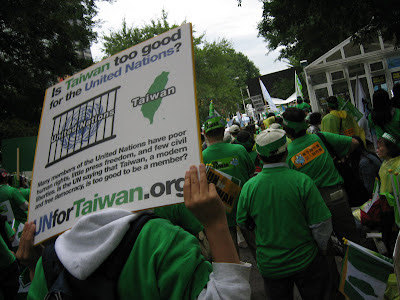 UN for Taiwan!
Posted by alvinaling at 6:27 PM

I love these pictures. It's cool you participated in this!

This is so cool! I must be living in a bubble because I didn't know about this rally.

I love the clever peace/piece flag.

Thanks for your participation, Alvina. It was reported to have 4000 people, not 500 to 1000 as you indicated. It is a great injustice to Taiwan of not allowing her to join UN. This is because China blocks her entering, and most nations are afraid of offending China. Whoever reading this note, please tell your representatives urging our government to support Taiwan.

Hi Alvina!
The rally was great! Alot more ppl than anticipated showed up, including me =P. Originally, my friends and I were going to stand in the sidelines and yell our support, but a lady asked us if we could volunteer because they needed more ppl for the rally parade...so i said of course! =P I was visiting from Atlanta, GA and it so happened that this rally was going on. I felt very proud being part of the rally!