Last weekend I went to Austin, TX for the first time for the Austin SCBWI "Write in the Heart of Texas" Spring Conference. Thank you to everyone who helped make the conference possible, especially Regional Advisor Tim Crow.

I was especially excited to go to Austin, not just because I had heard such wonderful things about the city, but also because it gave me an opportunity to meet some of the authors and illustrators I've worked with and/or corresponded with, and yet never met in person. People like the fabulous and generous Greg and Cynthia Leitich Smith, who hosted a great party the night before the conference at their beautiful home. 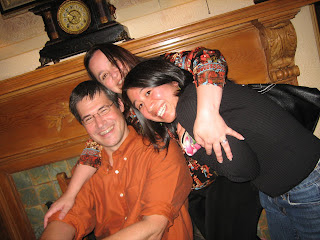 And then of course there was Chris Barton, author of the upcoming S.V.T. (and no, I won't tell you what it stands for) who picked me up at the airport and took me to Hoover's for my first sample of mac n' cheese in Austin (as well as grits and jalapeño creamed spinach): 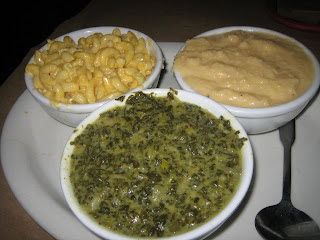 and some Elgin sausage (with more cheese grits): 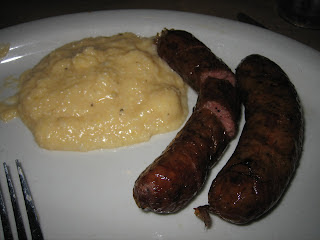 After the conference, he took a few of us out to the Congress Bridge for a viewing of the largest urban bat colony in North America. Here we are with Chris's agent, Erin Murphy. 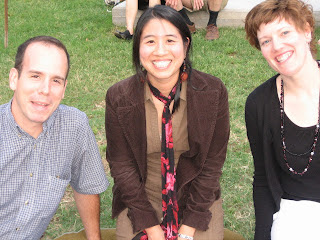 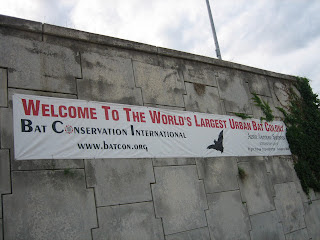 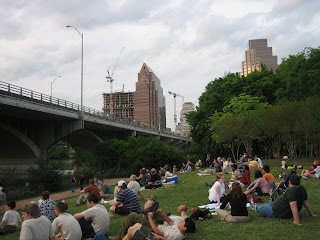 The viewing didn't quite go as planned, although it was still a lovely evening. Apparently, the weather was a little too cold and wet, and the bats didn't emerge till after sunset, so it was a bit hard to see them, but before giving up (as most of the other spectators did), we found a spot right in the corner of the bridge where we could see them wisp out under the streetlight. It was quite eerie, actually, almost like ghosts spiraling out from under the bridge. I took a bunch of pictures, but they're pretty dark. But I swear, if I lightened and enlarged this, you'd see bats. Really. 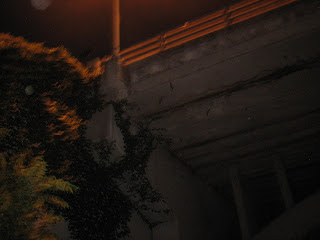 Chris has a great description of our evening here.

After the bats, we were off to sample a bit of the live music Austin is known for. Chris took fellow presenters Erin Murphy, Deb Wayshak, and me to Flipnotics where we stumbled upon Colin Gilmore and his band performing. Apparently Colin is the son of Jimmie Dale Gilmore, a name I wasn't familiar with, but one that Chris and Deb got quite excited about. And dad happened to be in the audience, as well. Pretty cool! 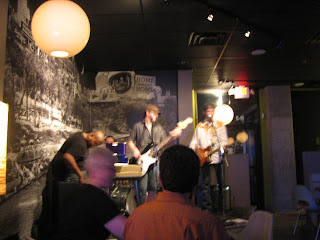 And of course, to back up, there was the conference itself. It was a very well-run day, packed with speakers and critiques and portfolio reviews. Everything was on a tight schedule that pretty much went off without a hitch, except, I'm afraid, my talk. I forgot to watch the time, and although I had timed my speech beforehand, I hadn't accounted for all the tangents I would go off on, and I ended up both going over my time slot by ten minutes, and also having to skip over the end of my speech, probably about ten more minutes worth of material. Partially because of that, I wasn't happy with it overall. I also wasn't sure if the talk was too dry, or too discouraging--as loyal readers of this blog know, there are a whole new set of issues that come up once you're published. But, well, I hope I gave everyone some good information. I'll be posting some excerpts of my speech here and there. To start, here's a part towards the beginning of my talk, which was titled "The realities of children's book publishing."

I’d like to share with you all the single most important piece of advice I’ve received during my professional career. In fact, I find it so important that I wrote it on a Post-It and have it up in my office to remind me every day. And I heard this advice from the oddest source—from Andrea Jung, CEO of Avon—yes, the cosmetics company. Little, Brown was formerly owned by Time Warner, and while we were housed in the Time and Life building, we were occasionally invited to Time Inc events. I belonged to A3, the Time Inc. Asian Affinity group, and won a spot at a luncheon where Andrea Jung was speaking. She spoke about a pivotal moment in her career, when she was second in command at , and passed over for the CEO spot in favor of an outside candidate. At the time, she had an offer to be a CEO at another company, and was counseled by Avon Board Member Ann Moore, who was CEO of Time Inc, “Follow your compass, not your clock.” She decided to stay with , a company that she loved and believed in, and was promoted to CEO two years later.

Follow your compass, not your clock. I think this advice holds true in all of your careers as well. I think so many of us are rushing, anxious, constantly comparing our own careers with everyone around us. We all need to make sure we remember the things that are really important to us. 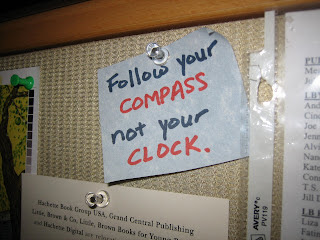 And now, back to what's really important to us--the food! (Okay, I'm being cheeky, but you know me, I love the food pictures.) After the conference, we were treated to another fantastic meal at Threadgill's where I sampled the local specialty, chicken fried steak. And of course had more mac n' cheese. And no, although I tried my darnedest, I did not finish the whole steak. 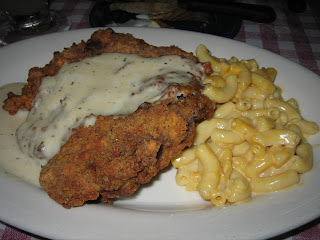 The next day I had brunch with author Diana Lopez, whose first middle grade novel, Confetti Girl is slated for the Spring 2009 list. We went to the lovely (and packed) East Side Cafe were I had migas for the first time--delicious! 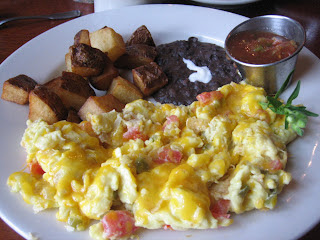 We met up with Greg and Cynthia Sunday afternoon at BookPeople--truly, one of the best bookstores I've ever been to. Their children's section is fantastic, and I was especially impressed by their selection. And, of course, I was thrilled to see many of the books I've edited on display, such as Firegirl by Tony Abbott: 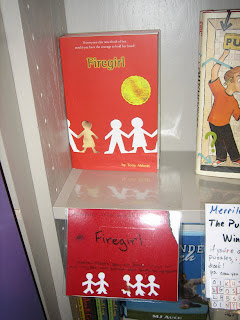 Plenty of Grace's books, too! 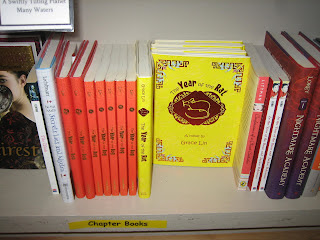 And Chowder by Peter Brown: 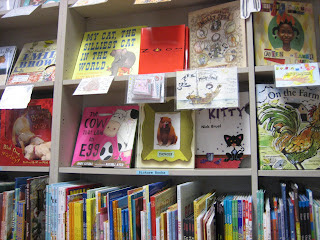 And finally, Sergio Makes a Splash by Edel Rodriguez, which just got a starred review in Publisher's Weekly! 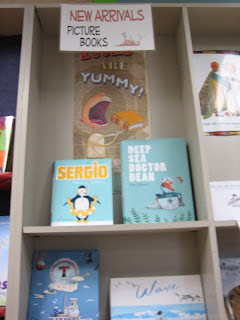 Here are Greg, me, and Diana in the kid's story time section: 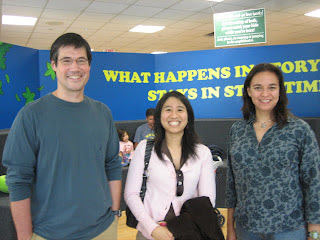 Then Cynthia, Greg, and I went off in search of cowboy boots (I didn't buy any) and margaritas at Guero's Taco Bar. 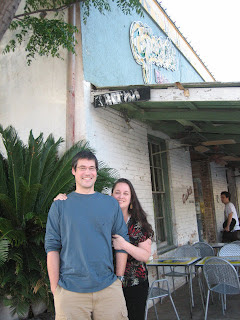 And then it was back to BookPeople to meet illustrator Marc Burckhardt. We went to dinner at Lambert's Downtown BBQ where we had fried green tomatoes, ribs, and, of course, mac n' cheese. For those of you keeping score, Lambert's mac n' cheese scored highest in Austin in my book (although I must say, it still doesn't compare to Silvertone in Boston). 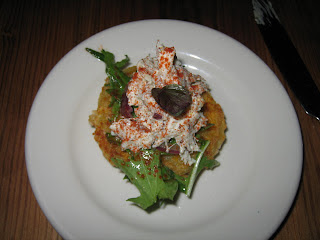 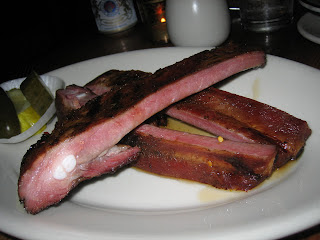 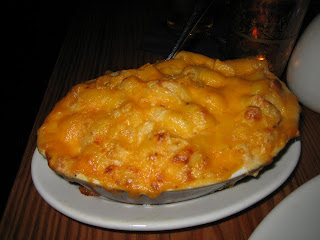 And now, back to packing. I'm off to Atlanta, GA for the International Reading Association conference. No doubt I'll have more food pics to share when I get back. Maybe I'll see you there!
Posted by alvinaling at 10:25 PM

Glad you finally made it to my home state. :)

I'm coming to NYC in mid-June. If you're around, I'll be sure to make you migas. They were my second favorite breakfast growning up (after pancakes...yum!) and I only started making them again in our new house.

Hope you are doing well.

Alvina,
It was wonderful to meet you at the conference.

Glad to hear you were able to sample some fabulous Texas food.
I'm almost certain that's what makes Austin a staple in creativity, as
you can't write, paint or play music on an empty stomach. :)

Sorry to hear about the bats. They really hit their peak around September or
October. That being said, I suppose you'll have to come back for another visit.

Thanks again for the inspiring speech. It was fantastic to hear.