Cross-posted from the Blue Rose Girls:

Last weekend I attended my fifth Kindling Words. (Incidentally, I remember the first one I attended, with Grace--I read a very early draft of what turned out to become The Year of the Dog!)

Kindling Words, for those of you not familiar with it, is a children's book professional retreat. Attendees include published authors and illustrators, and editors. I wrote about the retreat two years ago here, and my very high opinion of it has not changed at all. I was sorry to have missed last year because of my trip to China (although not sorry to have gone to China!), and it was good to be back this year and see so many familiar faces--and many new ones, too. Because of the great demand for the retreat, the number of attendees was increased this year to 85 from 75. And I was absolutely shocked and thrilled to discover that the editor strand was 16 people deep! Incredible. Over twice as many as two years earlier.

Kindling Words is held at the beautiful Inn at Essex, also home to the New England Culinary Institute, so yes--the food is delicious! 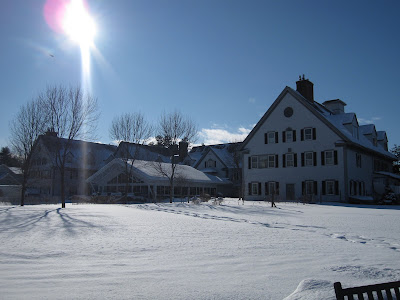 This year I drove up with fellow editors Nancy Mercado of Roaring Press, Rotem Moscovich of Scholastic, and Stacy Whitman, formerly of Mirrorstone, now freelancing. We arrived in time for cocktails and dinner. Thursday nights have been unprogrammed in the past, but this year the organizers had something special planned. We split into three groups and rotated into three different rooms. My first room was being led by Gregory Maguire, and we went around the room, each composing one line of a poem (the first and last lines were provided by W.H. Auden). The result, as you'll see later, was both humorous, random, and moving.

As we were writing the poem, we could hear drumming in the background, and so it was no surprise that our next room was filled with drums. This is us before getting any guidance:

I can't remember the name of our drum leader, but he was incredible. He also left his drums for us all weekend, with the one caveat that we were not allowed to drum alone, which resulted in some spontaneous community drum circles. 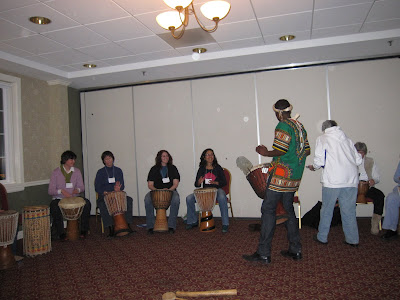 The final room was filled with large canvases and lots of paint. We were to paint until all of the white of the canvas was covered, and paint using our poem as inspiration. 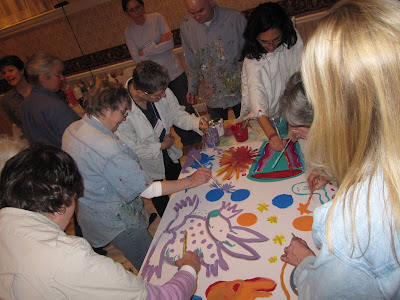 Here's a video of us painting while Gregory reads the second half or so of our poem:


And here is our painting farther along: 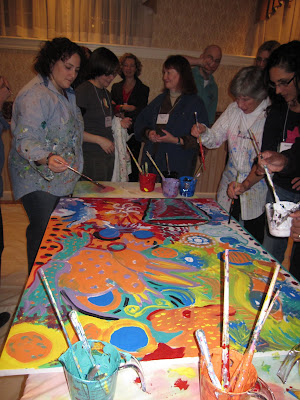 The next morning, the "regular programming" began. This year, KW regular Nancy Werlin led the author's strand. She spoke about matching your writing with a reader's appetite, accepting the fact that not every reader will have the right sensibility for your work, and making sure you satisfy their craving at the end. I found a lot of what she discussed helpful in thinking about how I edit. 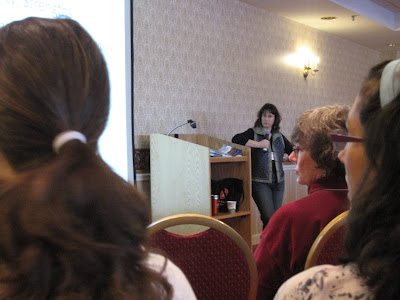 Mary Jane Begin led the illustrator's strand. Now I've seen first-hand why her courses are in such demand at RISD. She was extremely informative and the images she showed were inspiring. Here she is using sketches from Ratatouille to discuss characterization and development. I also found her presentations helpful to my own work as an editor, in terms of evaluating art. 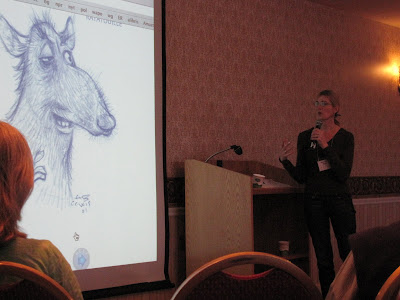 The amazing Ashley Bryan was the keynote speaker for Friday night. I had heard him speak before, but just briefly at the Eric Carle Honors and the Original Art Show opening. I realized that those had just been an appetizer for the main event. He read poem after poem in his wonderful, rich voice, so expressive and inspiring. He also had us repeating lines after him. I, for one, was energized! It made me want to read more poetry. And that's the whole idea, isn't it? 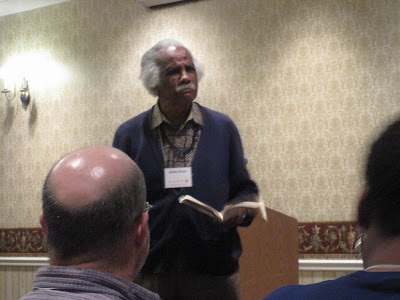 Saturday night was the traditional candlelight reading. One change was to divide the readers into two rooms so that everyone who wanted to read would have the chance--personally, I didn't prefer this set-up, as not everyone had the same experience to discuss later. But still, as always, it was such a wonderful and varied event, as people read five minutes of their unpublished work--from humorous picture books, to tragic young adult novels. 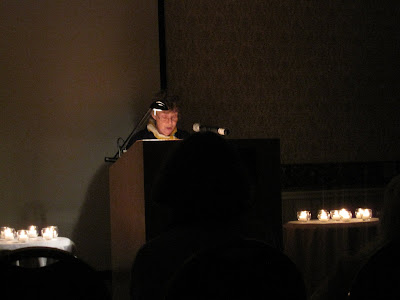 And the grand finale was the bonfire where we burned pieces of papers with goals and/or things we'd like to let go. I chose to write down something I wanted to let go (the secret stays with me and the fire!). And, as always, we sang song around the fire. It was a bit too cold to stay outside for very long, though. But each night we retired to the hospitality suite for wine and socializing. 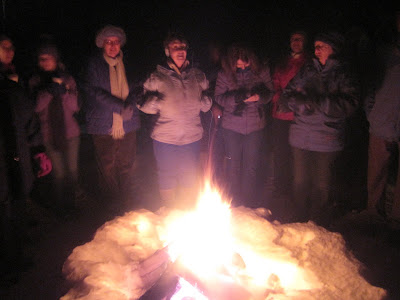 Over the weekend, the editors met in three closed sessions (two planned, one spontaneous). Our topics ranged from the economy (bad), technology (eBooks), the child safety act (frustrating), our editorial processes (varied), dealing with agents (auctions), relationships with authors (fulfilling), and more. We also held a panel with the larger group where we answered pre-submitted questions, the majority of which were about the economy. I was coming from a very different perspective in that regard, as I work for one of the few publishers who is doing quite well right now (Stephenie Meyer!), but everyone, even us, is bracing for the worst and being extra-cautious. That's not to say that we all are not continuing to buy books and publish them carefully and well. In some cases, the editors welcomed a bit of a slow-down in acquisition, as that allowed them to focus on special projects that they've been meaning to work on for a long time. I think we can all sympathize with that.

Oh, and another thing I discovered with horror was that many other companies were discouraging their editors from taking agents to lunch, to help cut costs. You know how I love those agent lunches!

In all seriousness, though, these are tough times. I've been seeing friends lose their jobs, both in publishing and out. For all of you authors and illustrators out there, it probably will be true that publishers are buying fewer books right now. But don't despair--if you can't sell your project now, do what you always have done--keep creating art. Keep writing, keep painting, keep on keeping on. This too shall pass.

Special thanks to all the organizers: Marnie Brooks, Tanya Lee Stone, Alison James, and Mary Lee Donavan. This truly was the best KW yet!

Posted by alvinaling at 8:32 AM

Hi Alvina,
Thanks so much for your summary of the retreat. It sounds extraordinary and I hope to attend someday.
Jean
P.S. Who got to keep the painting you all did? I hope you auctioned it off because I would have surely bid on it.

I keep hearing such amazing things about the conference. I will definitely try to get there next year! There aren't many opportunities for editors to get together like this.

What a wonderful reflection of your KW 2009 experience.

I'm sorry I missed KW this year. Your recap only poured salt on the wound. (Guilt Alert, Guilt Alert!) I am genuinely thrilled all of my friends there came back still basking in the glow of drum beats and rhythms, poetry and paint and inspiration.

Oh g-d I love KW. It felt -wrong- not to be there this year but it was an impossibility. I pray the door is open again next year and that I swoosh in as if I never left the bonfire.... {}

Jean--good question! I actually have no idea what happened to the paintings...I'll ask!

KW sounds SO magical. sigh.
Not funding business
lunches is like not letting elementary kids have playground time. That's where some of the
most important 'work' happens.
I appreciate your keep
on keeping on advice. Bravely
onward!!!