Beyond the Book: The Curious Garden by Peter Brown

Beyond the Book:
The Curious Garden by Peter Brown. 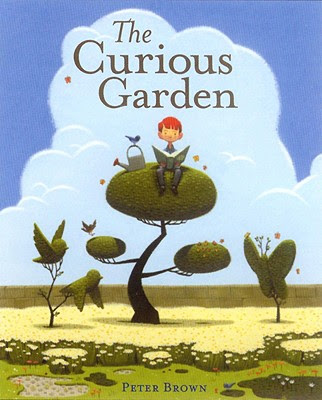 Most of you probably know Peter's work from his Chowder books. Or perhaps you know him from his very first book, Flight of the Dodo (read my Beyond the Book here). His newest book, just out now, is The Curious Garden, and it's a bit of a departure from his previous books. Instead of the irreverent potty humor of his earlier books, this one has a more gentle humor, and a more classic feel overall.

The Curious Garden is the story of a boy named Liam who lives in a dull, gray city. Despite the dreariness of his surroundings, Liam still loves exploring, and one day he discovers a struggling garden on the top of an abandoned railway, and he decides to help nurse the plants back to life. Eventually, the plants thrive and end up exploring the whole city, inspiring other to join in the act of becoming gardeners!

Peter has really outdone himself with the art—each painting is truly a masterpiece, and the details throughout are just marvelous and full of life. There’s also a fun search and find element here, as red-headed Liam can be found on every spread, even the cityscapes. This is a charming, breathtaking and beautifully designed book in the classic tradition of The Little House and Mike Mulligan and his Steam Shovel. This book really has both the best writing and painting that I’ve ever seen from Peter--it was a true labor or love, and I’m incredibly proud of him, and this book. Here's one of my favorite spreads which we turned into a lavish poster: 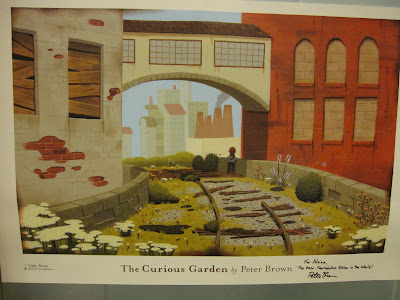 Peter was inspired to write The Curious Garden in part by the Highline, a public space on an elevated railway on the West side of Manhattan, scheduled to open to the public later this year. There are also similar parks all over Europe, and what’s wonderful about this book is that the setting is really a kind of every-city—it could be NY, or London, or Berlin. There’s also a great environmental theme here (and we've printed the book on recycled paper), and of course I also love the message that one little boy can change the world--he helps completely transform a gray dirty city into a lush, green world.

Speaking of a lush green world, our fabulous marketing team decided to send these little pots with a packet of seeds to key accounts, and I decided to test my green thumb. Here they are, just starting to sprout: 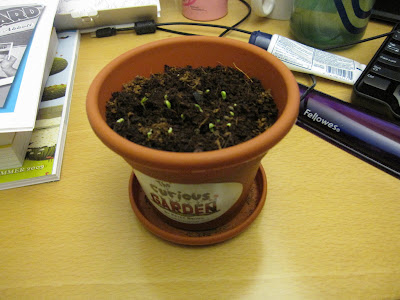 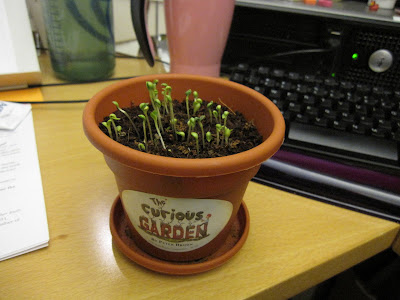 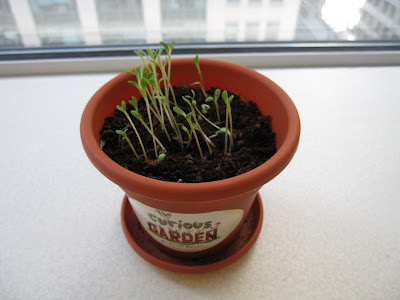 But then today I noticed the little forget-me-nots looked a little droopy. I've never been good with plants, and I think they might be dying. So sad. We'll see. Maybe I should sing to them, as Liam does in the book! 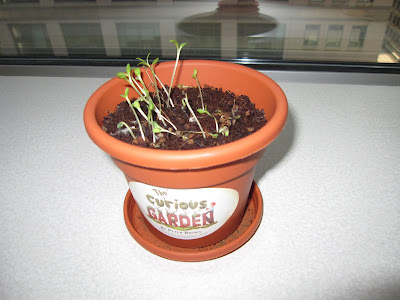 One of the most exciting firsts for me in my publishing career is that we made a display for The Curious Garden. Now, the way this works is our marketing team chooses a few key books each list and offer displays for them. They design the display and mock it up for the catalog and offer it to accounts to order. Only if they get enough takers for the display do they actually produce it. I've had other displays offered for books I've edited, but this is the first time there were actually enough takers! I was so excited to put it together for my office: Isn't it cool? And it comes with a little pocket for the free seed packets. And if you'll notice the little star stuck on top, that was added by me in honor of its starred review in Publisher's Weekly:

"Brown's latest is a quiet but stirring fable of urban renewal, sure to capture imaginations....In Brown's utopian vision, the urban and the pastoral mingle to joyfully harmonious effect-especially on the final pages, which show a city filled with rooftop gardens, fantastic topiaries, windmills and sparkling ponds."

Peter is going on a carbon-neutral tour later this month (including a few appearances at IKEA? Strange but cool), check out the dates and locations here!
Posted by alvinaling at 9:47 AM

Email ThisBlogThis!Share to TwitterShare to FacebookShare to Pinterest
Labels: beyond the Book, books I've edited

I just received my copy of this book last week and am completely in love. I almost didn't want to remove the plastic, but once I read it, I was glad I did!

What a charming story. Yay Peter!

Hey Alvina! I am trying to grow my Curious Garden forget-me-nots but... there are no instructions!

Is it sposed to be in full sun, or partial shade, or what? And how deep do you put the seeds in!?

Did you know that there are different kinds of forget-me-nots and they all require different things for optimal growing conditions? The internet is not being helpful.

(Yes, I might be overthinking this adorable marketing toy)

(PS: This book was one of our bestsellers this month YAY PETER!)

Sorry, I killed my forget-me-nots. Oops. Next time we do a marketing item like that, I'll ask that they include instructions!

This book looks superb. I can't wait to go out and buy it.