How I read submissions

Cross-posted from the Blue Rose Girls. Read the original post (and comments) here.

In my previous post about my reaction to Jellicoe Road, I touched a little on the way I read submissions, mainly that I generally decide about novels based on the first 30-50 pages. I thought that I'd expand on this and talk more about how I read submissions and the way I decide if a book is something I'm interested in taking on, or something to decline.

It's just not possible to publish every submission we get. Knowing this, it's true--I'm looking for reasons to reject most manuscripts. Some possible reasons? (feel free to ask me to elaborate on any of these)

-not well written
-too slight
-too quiet
-forced rhyme, off rhythm (for picture books, mainly)
-too similar to something already on our list
-too similar to too many books already in the market
-forced/inauthentic dialogue
-too didactic
-melodramatic
-cliche
-slow pacing
-too niche in appeal

and of course I could go on...

However, I'd be lying to say I'm not always hoping for that surprise--that I'll fall in love with a submission. And sometimes I'll fall in love with something despite it being something on the above list. It really IS like falling in love--I can fall in love with something, flaws and all. When I'm reading something that I'm really loving, my heartbeat will speed up. My mind will start racing, thinking about what I need to do to ensure that I get that manuscript. I'll imagine pitching the book at our editorial meeting, and then at our acquisitions meeting. I'll think about how I would edit the book, even what the cover would look like. I picture it winning the Newbery, making the NY Times bestseller list. In other words, I'll imagine us married with children during the middle our first date.

Generally, when I read a manuscript, it's either/or. Either I find a reason to say no, or else I fall in love with it. But the tough decisions happen when a manuscript falls somewhere in between. Agents, and perhaps authors who submit on their own, may be familiar with that rejection that takes an especially long time to come, where an editor apologizes and says that she was "mulling it over." This is what happens when I read a manuscript and can't immediately say no, but don't completely fall in love with it either. When this happens, I may put it aside to revisit later. And sometimes when that happens, I don't think about it again, and therefore usually will end up declining it. Sometimes when this happens, I keep thinking about it, which it generally a good sign that I don't want to let it go. And sometimes I'm completely on the fence, and then will either ask my assistant to read it, and/or I'll bring it to our editorial meeting to get some second reads.

This happens when the concept is really great, but the writing isn't particularly special. Or if there's just nothing wrong with the writing or the book, but I just don't fall in love with it. Or if I know the book is something publishable, but it's about something I just can't see myself working on, or reading over and over.

Sometimes when I'm in-between, a lot will depend on the current state of our list. Are we looking for more of that particular genre, or are we too saturated? For example, we're fairly overloaded with fantasy right now, which allows us to be even more selective than usual in acquiring that genre. A fantasy novel really has to be outstanding and original for us to even consider taking it on. For picture books, when I first started almost ten years ago, it was so much easier to acquire picture books than fiction. But in the last seven or eight years, in reaction to the market, we've cut our picture book list way back, and because of that, I'm even more picky when acquiring them--I can't just like something, I need to love it.

Sometimes I'm feeling in-between when an agent tells me that he or she has either received an offer, or else they "have a lot of interest." When this happens, I'll usually just end up passing on the submission, thinking that I don't love it enough to want to compete against other publishers. Of course, if I do love a manuscript, hearing that there's other interest will spur me on to move through the process more quickly.

And yes, I'm looking for love--I do want to say yes, I just know I can't say yes to everything. But like most people, I want the happily ever after.

In other news, I'm so proud and excited to share the news that one of those books that I fell in love with has attained a kind of "happily ever after": The Curious Garden by Peter Brown has hit the NY Times Bestseller list at #7! It's also #7 on the Indiebound bestseller list.

(BTW, all but one sprout in my Curious Garden pot has died. But that sprout is going strong!) 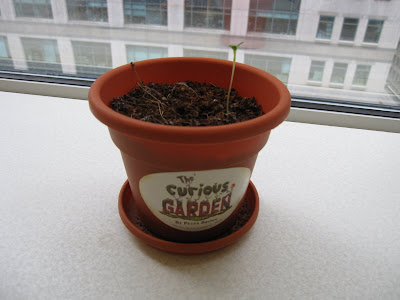 Posted by alvinaling at 7:31 AM

Email ThisBlogThis!Share to TwitterShare to FacebookShare to Pinterest
Labels: how i, publishing

Thanks so much for a look at the other side of getting books published.

What do you mean when you say too slight?
thank you

Ashley, "too slight," generally means that I don't feel like a submission has enough depth. This could be that there isn't enough conflict in the plot, or if the book feels too one-note, etc.

Can you elaborate on "too quiet"? It's a comment I've received in more than one rejection letter, and I think I know what it means yet I can't help thinking some of my favorite award-winning novels are quiet, to my mind. I think of Dicey's Song, books by Betsy Byars, even some by your fave Sharon Creech! Am I misunderstanding the term, are these books lucky exceptions, or is "quiet" not a bad thing, simply out of style today?

Too quiet: This is similar to "too slight"--basically a book that may not have much of a plot, where not much happens. I happen to like quiet books, though, but the writing has to be absolutely standout gorgeous. Many good night books are quiet, and for good reason.

I would say if the writing was brilliant enough to potentially be award-winning, it's okay to be "quiet."

I appreciate your succinct and honest explanation of your process in reading submissions. I know the market is always changing and can be different from publisher to publisher. Do you recommend resubmitting manuscripts to publishers if the rej. letter states that the book doesn't meet their current needs?
Tracy

Tracy, sorry for the delay. I would say that unless the rejection letter specifically stated that they would welcome seeing the project again, do not resubmit. Honestly, the line "the book doesn't meet our current needs" is basically a standard excuse that means that we didn't like it enough to want to take on.