A week ago, on a warm Sunday afternoon in October, Greg proposed to me on a rock in Central Park.

Now, some of you might remember this blog post from over five years ago. In it, I talked about how my parents met, and how they got engaged on a rock in Central Park. Well, Greg remembered that story well, and crafted a plan.

I was busy with work all weekend (I had three novels to edit), but Greg asked me to come out to a fundraiser with him on Sunday afternoon. He said it was for a charter school his friends Pat and Frank supported. I actually had a ton of work and was a bit distressed and said, "I really don't think I can go." He asked if I could go "for just a few hours"--he said I could meet them later if I didn't have time to go to the whole thing, so I agreed to do that. "But I reserve the right to leave early" I said. At around 1 pm, after dressing in a jacket and tie (he had me pick his tie after presenting me with a few options), Greg left the apartment, and I told him I'd meet him around 4:15. He told me to take the Q train to 57th and 7th, and then to call/text him to find out where they were, and if I couldn't reach him, to text Pat.


When I got there, I tried calling Greg but he didn't pick up, and then texted both him and Pat. Pat texted back right way, and it turned out that she and Frank were at the station to pick me up. She said Greg had gone ahead, and we would just walk about 10 minutes in the park to get there.

It was around then that I was suspecting something might be up, but didn't want to assume/hope too much.

Pat and I chatted on the way (she told me ALL about the fundraiser), and then a few minutes later Pat pulled me aside. She pulled a piece of paper out of her bag. "I'm supposed to give you this" she said. On the paper was the picture of my parents on the rock that I had posted in that blog post:
Of course, then I was pretty sure I knew what was about to happen.


"And now I'm supposed to give you this," Pat said, and handed me a homemade card with photos of me on the front. Inside were song lyrics for this song (with a few of the details crossed out to match how we met-- "London New York," for example.):


And then Pat said, "Here, listen to this," handing me her iPod and headphones, playing the song for me to hear.

"Now, follow me," and we kept walking.
I was listening to the song (which was quite beautiful and touching) while trying to remember where that rock was--I kept scanning the park (which was quite crowded due to the lovely weather) to see if I could find Greg. Finally, we turned a corner around the rink, and there he was, looking very dashing in the pink tie I had unwittingly selected for him, and I think I basically ran to him. 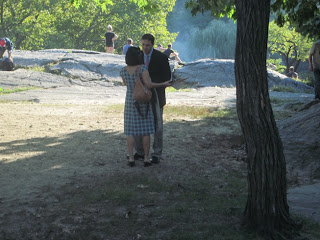 It's kind of a blur after that, but I recall Greg saying, "So, there's no fundraiser," and then he brought me over to sit on the rock (the same rock my parents were sitting on in the photo), and handed me a little box wrapped in a bow. As I was opening it, he asked me to marry him. "Of course I'll marry you," is what I think I said.
Pat and Frank were taking pictures the entire time, and Greg said there was quite a crowd of spectators around who applauded, although I didn't register any of that.* He said he had to keep asking people not to sit on that rock for an hour or so before I got there. He decided that pacing back and forth on it and looking possibly crazy was the best technique for keeping unsuspecting picnickers away.


Anyway, Greg told me later that he had read that blog post about my parents' proposal a while ago (he said he had pretty much decided that was what he was going to do when he first heard the story), and then wandered around Central Park with the photo of my parents on the rock, comparing background trees and branches and tiny rock features until he was certain he'd found the exact one.

Oh, it was a glorious day. And, as my father told me after hearing the story, "Now your marriage will be as solid as rock!"

*Apparently, there was a plane sky writing at the same time, and people had stopped to look up to see what was going on. Then, they looked down at us and saw what was going on, and applauded. We found out later that the writing spelled "Last Chance"--ha!
Posted by alvinaling at 10:46 PM

I am teary-eyed. Beautiful, beautiful story. Congrats to you both.

On behalf of SCBWI Tokyo, congratulations! Thank you for sharing your story.

This is fanTAStic news Alvina! And welcome to the very happy club. Marriage is amazing and I'm so happy for you! :)

Thanks for sharing that special moment. :)

THAT IS SO WONDERFUL!!!

I loved how he even tried to find the matching rock!! And how he had to occupy it. Hehe.

What a beautiful way to blend two hearts into one. Pebble by pebble. Long may you rock. {}

Great story, great guy, great partnership! And I like the details you added here and if you think of more, hope you will add them too -- and more pictures.

Many good wishes for doublehappiness!

What a beautiful engagement. Congratulations!

WOW! Such a beautiful way to propose, tying in with your family history. I love it.

How exciting! You look so happy. Congrats to your both.

I wish for you a marriage as strong as your parents. They definitely got it right! :)

You just made me cry! Congratulations to both you and Greg!! xoxo
debbi

Aw, Alvina, what a guy!!! And what a story you have to tell for years and years to come.

What a beautiful story! Congratulations. :)

This is gorgeous - how thoughtful, considerate and beautiful of a proposal!

I just started HowHeAsked.com and would LOVE to have this featured story on the site. Please e-mail me at HowHeAsked@gmail.com

Thanks so much :)
Best and lots of congrats!
Stacy

Wow, I got chills listening to the song while reading this post. CONGRATULATIONS!!! I can't believe I missed this news earlier.

LOVE the quote from your dad, too.

(P.S. My word verification is "sings!" How appropriate!)

The chance to love and be loved exists no matter where you are.