I wrote most of this last week, but didn't have a chance to finish. It seems anticlimactic to write about now, but here you go:


Last Wednesday night, a little before 6 pm, I was at work. T.S. (I just read that he also blogged about the experience on his blog) had just come over and we were talking about when to have our belated birthday Karaoke celebration. All of a sudden there was a crash, like loud thunder, and our lights dimmed for a second and I heard people gasp. I didn't think too much of it, as it had been thunderstorming all day. But then there came a low rumbling, like thunder. We paused for a moment, then kept talking, but the noise didn't stop. It was unsettling. "What IS that? Is that thunder? What IS that?" I kept asking. T.S. started walking away and then back to the window. We couldn't see anything. "You're freaking me out. That noise is freaking me out" T.S. said. I heard someone mention a fire in the building next door, smoke visible from their window. I couldn't see anything. Then our fire alarm started sounding. Connie stood up. "That's it, I'm leaving!" The fire safety director announced that there was a fire alarm on the third floor, and to stand by. People started gathering up their stuff. I went back and forth between my desk and the hallway, undecided. It was probably nothing. But what if it was something. Should I take my bag? Should I turn off my computer? I had just heated up some pasta, and the bowl of unfinished pasta was sitting on my desk. Should I go wash it out?

We looked down the hallway and A was gathering everyone up telling them to go to the emergency stairs. I grabbed my bag. "There was a lot a smoke" L said worriedly. We stood waiting for an announcement. "You should start walking down the stairs" C said, to A, who is over 8 months pregnant. That's when I started thinking, A is pregnant. M has two kids at home. L's fiance is a fire fighter. What if this is something big. What's going on?

We looked into the stairwell, and there were people going down the stairs. "Did someone tell you to go down, or did you just decide on your own?" A asked. They had just decided on their own. "We should go down" C said. "But they said the alarm was on the 3rd floor, what if we're walking into a fire?" A asked.

We pondered that and waited a little more. Then someone made the decision that we should start going down. For some reason, at that moment I decided to go back to my desk for my umbrella and galoshes, and by the time I started down the stairs, probably 2 minutes later, everyone was gone. I saw a few people I knew in the lobby, but wandered around a bit aimlessly, looking for my department but not seeing anyone. I realized I had a voicemail on my phone and tried to call. It took a few tries, but I eventually got through. It was from my roommate Rose.

"I'm on the bus right now and someone said there was an explosion in your neighborhood. I'm calling everyone I know who works in that area to see if they're okay."

I decided to go outside. People were milling around all over the place. "Someone must know what's going on." one woman said to another. They saw me with my cell phone. "Do you know what's going on?" they asked me. "I don't know...my roommate said there was an explosion..." I wandered to Lexington Ave, thinking I would just walk home and turn on the news, and then I saw it. Billowing white smoke, and a lot of it. Everyone was on the street, watching. On their cell phones, taking pictures. I took a few pictures, too. 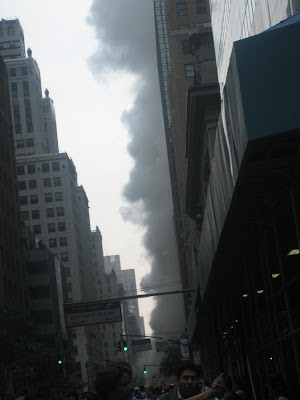 I stood there for a while, unsure of what to do. Nobody seemed to be panicking. Just curious. But everyone was on their cell phones, but none of my calls were getting through at this point, just like during the blackout. I overheard a woman talking about a manhole cover, another mentioned a steam pipe, another mentioned a transformer.

I had a kickball game scheduled for later that night on 137th and Riverside. I wondered if it would still be going on. Was the whole city in chaos? Should I just go up there? I amazingly got through to Meghan who was planning on playing kickball with us that night. "Where are you?" I asked. "I'm stuck in traffic in my car..." "Are you still planning to go up to the park for kickball?" "Well, I was planning on it." "Let me try to call my teammates and see if the game is still on." I had the thought: I would feel weird playing kickball if a serious tragedy had just occurred. I decided to call my parents. I figured I could get through more easily to them since they were in CA. I got through to my dad. "Dad, there was an explosion near my work and a lot of smoke...can you look on the news and let me know what's going on?" He checked the internet first, nothing. Then CNN on the TV. Nothing. "Oh well, you're safe, right?" he said. I was. "I love you!" we said. I tried calling my friend Alexis, who was also co-captain of our kickball game. "Do you know what's going on?" I asked "Well, the game is still on, I don't think it's going to rain." "No, I mean, what's going on with the city?" "What do you mean?" I told her about the explosion, the smoke. "No, I'm here in Times Square eating dumplings. Didn't know about any of that! Although I did hear a bunch of sirens."

I decided that if the West side of Manhattan was oblivious, things overall were probably fine. My dad called back "It was a steam pipe explosion." He read me an article on CNN. He paused. "So, it's not terrorists. You're okay." It didn't occur to me exactly that I needed to hear that. I didn't really think it was terrorists. But still.

And so I walked over the Columbus Circle to catch the train. The day ended normally, with a kickball game (we lost, yet again), and happy hour drinks. The next morning, the streets on the way to work were emptier than usual, but by the following day, for the most part, everything seemed back to normal.

Just another NY story.
Posted by alvinaling at 11:21 AM

Wow. It's so weird that you had to call the other coast just to find out what was happening!

Wow. I keep thinking I wished I had a digicam like yours and this is one of those times. My cellphone is just deficient. I am going to link to this post in my blog so everyone can see the picture and also get a calmer side to the events.

I couldn't believe it when I heard it on the news. I am glad to hear you are safe.

You were so calm.

Situations like that are rare, thank goodness. And they are so surreal. I've been caught in a few. A fire storm that went on for several days started a mile and a half from where I lived. When a thing like that happens, no one really knows what is happening when it starts. You just have to react. It kind of has haunted me forever, and it kind of reminds me not to take anything for granted and it makes me grateful too.