I'm very happy with how the books I've edited have been received so far. This year I had four starred reviews for four books: Year of the Dog by Grace Lin, Sound of Colors by Jimmy Liao, Nothing But the Truth (and a few white lies) by Justina Chen Headley, and Firegirl by Tony Abbott. I got more good news last week: Firegirl got its SECOND starred review! 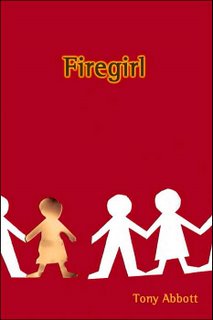 So I'll take this opportunity to write about Firegirl just as I've written about Year of the Dog, Nothing But the Truth, and others.

This one came to me the traditional way, from an agent, but the interesting back story to how that came about is that it was sent to me because the agent, George Nicholson (a legend in the children's publishing field) was impressed with the work I had done to acquire Flight of the Dodo by Peter Brown, which was represented by his then assistant, Paul Rodeen. So I would never have gotten the opportunity to work with Tony if I had not met Peter at that illustrator party so many years ago. I like thinking about what events and connections had to have been aligned in order for something to happen.

So George sent Firegirl along to me. Tony Abbott is fairly well-known for his commercial, paperback-original series with Scholastic, The Secrets of Droon, but Firegirl was something completely different. I don't remember what George said when he sent it over, but I do remember sitting in bed one night and starting to read the manuscript. I had no idea what it was about (I generally don't like to read cover letters before diving into the manuscript, which sometimes has proven problematic because there is oftentimes a due date or other pertinent information in the cover letter)--and I actually thought it was going to be a science fiction or fantasy novel, partially because of the title, and partially because the agent must have mentioned that his previous series was fantasy. At any rate, I had that delicious feeling of anticipation when you start to read a book or watch a movie that you know will be good but you have no idea what it's about. I distinctly remember feeling my heart beating faster because I was realizing the manuscript was special from the first few pages, even before getting to the part where Jessica joins the narrator, Tom's, seventh-grade class. I remember actually laughing out loud at Tom's fantasy sequences and thinking, wow, that's what I do. That's how I think. And then came the part where Jessica joins Tom's class, and that sealed the deal for me. Jessica, you see, is a severe burn-victim, and ultimately this book is about how her presence, even though she's only there for a short time, changes Tom's life forever.

My initial impression was right--this manuscript was special, from beginning to end. I found it to be compelling and quietly powerful, most of all because it was a novel that showed that even the smallest of gestures can make a powerful difference in a person's life. I brought it that week to our editorial meeting, where another editor wholeheartedly and passionately loved it as much as I did (thanks, Sara!), propelling it to our publications committee meeting where it went on to easily be approved. It was really interesting to see how much the novel touched everyone, and more than one committee member recounted a similar instance in their childhood that affected them.

We signed Mr. Abbott up to a two-book deal, and I hope Little, Brown will be his home for his literary fiction. Firegirl took very little editing on my part--my comments were all very small ones, and the changes that Tony made were subtle. It came to me in almost perfect shape, so I cannot accept any of the praise that it has been getting, except to say that I recognized this beautiful, wonderful book. Aside from its two starred reviews, it's received many other glowing reviews, including this one. Some say it has Newbery potential, but I'm not even going to dare to hope, although I certainly think it deserves it! (Then again, I think all of my books deserve Newberys and Caldecotts. Someday, someday... it's on my list of things to do before I die.) Oh, and since I'm talking about this (literally) beautiful book, I would also like to give props to the designer Tracy Shaw for the perfect jacket design.

Tony is working on his second novel now which is due out next Fall of 2007, and I'm very excited to say that although it's completely different, it's wholly as wonderful. I have no doubt that he is a future Newbery winner many times over, and I know he has a long, incredible career ahead of him. I'd be honored to be along for the ride!
Posted by alvinaling at 11:04 PM

Email ThisBlogThis!Share to TwitterShare to FacebookShare to Pinterest
Labels: books I've edited, children's books, Firegirl, Nothing But the Truth (and a few white lies), Sound of Colors, Year of the Dog

yippee--what a good birthday present for you. I've been hearing a lot of glowing things about "Firegirl"; you might be going to a formal awards ceremony sooner than you think!

Wow, congratulations! I can't wait to read it. I'm reading NOTHING BUT THE TRUTH right now and am really enjoying it.

I've just got Year of the Dog on a special delivery by my parents :) I can't wait to read it. I remember Firegirl very clearly -- and I'm glad it's doing well! But mostly, I'm glad Alvina's list is doing so well. It's harder and harder to find editors who will champion a variety of quirky and interesting and perhaps risky projects. But Alvina is doing it over and over, and proving how important and valuable and necessary that kind of acquiring is. So, keep at it Alvina. I've no doubt that one of your books will hit the medals... YeeHAW

Thanks, guys. I kinda wish I didn't mention the medal thing... I'll jinx it. But a gal can dream! It's a bloomability, after all.