I'd like to introduce baby Samantha, born to Amy and Bryan on Sunday morning, a week early: 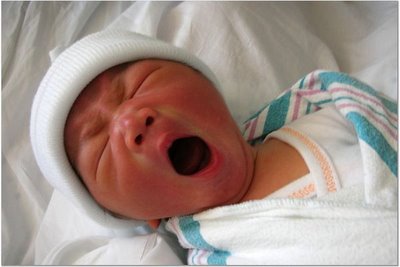 It was a busy but great weekend that kicked off with a Friday happy hour, then Mariko's Super Sweet 25th birthday party where we surprised her with a giant replica of an iPod constructed by Sarah (we did also get her an actual iPod, although she said she would have been happy with just the cutout): 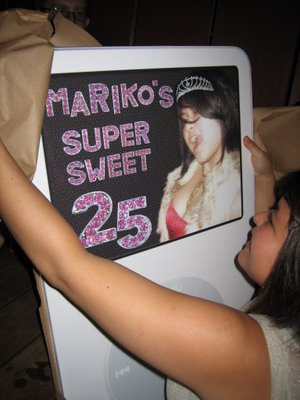 ...then Saturday night was Don and Nikki's wedding in a Manhattan loft with a great view of the Empire State building (or "Mr. Empire" as the Frenchies used to call it), and Sugar Sweet Sunshine cupcakes! They guarded the cupcakes closely before it was time to eat them, so closely that when I went to take a picture, I heard one of the "guards" mutter to another, "She's too close!" But I finally got one.: 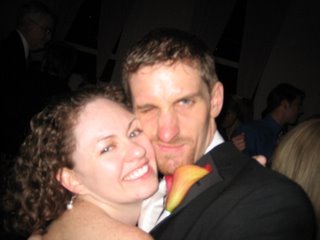 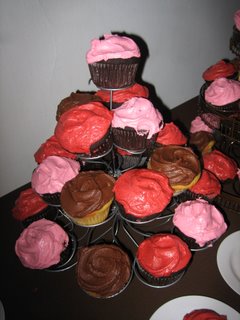 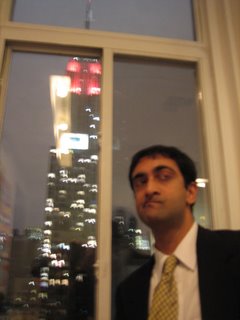 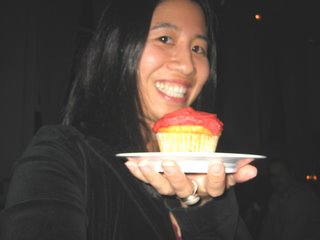 ...and then on Sunday a 15- mile run. This one was so much better than my last one. For one, I didn't have to stop to drink--just plowed through it. This was the farthest I've run without stopping, and I'm not counting my 19-mile run because I stopped to use the bathroom.

Just two stories from my run in Central Park:

1) Around 75th St on the West Side where that little lake is, there was a guy performing, playing guitar and singing, and the first time I passed, he was singing a song about how "it sure can suck to be single in this town." I thought the singer had a nice voice, and the song was pretty amusing.

An hour later I passed by the same spot again, and singer was still there. And guess what. Yup. He was singing the exact same song! I didn't find it as charming as I did the first time.

A little less than an hour later I passed the same spot again and thought, "If that guy's singing that same song, I'm going to kill him" (I was cranky around then) and luckily for both of us, he was singing "What a wonderful world" which was beautiful, and especially nice because out of desperation, I had started reciting "99 Bottles of Beer on the Wall" except I had started at 88th Street with "88 bottles of beer on the wall" and was kinda despairing that after getting down to 50 bottles that my mind would force myself to keep singing until no beer was left, but thankfully I started singing 'What a wonderful world" instead.

2) When I was finishing up mile 11 (right around the second time I heard the guy sing about it sucking being single in this town), I ran behind a running couple. The guy seemed to be limping along pitifully, and it turns out for good reason. I heard him say, "We're nearing twenty...I'm feeling funny" and then laughing proudly at this new "rhyme" he had created, he repeated it: "Ha ha--I'm nearing twenty. I'm feeling funny" and then proceeded to "rhyme" a bit more, more that didn't actually rhyme with twenty (although all rhymed with funny): "Almost twenty...I'm hopping like a bunny. Haha. Almost twenty...I can't believe I'm not doing this for money..." It kind of reminded me of a bad children's rhyming picture book submission.

But after I ran another lap, as I found myself nearing my goal of fifteen miles, I started the rhyme game myself:"Fifteen...you know what I mean. Fifteen...I'm gonna rupture a spleen. Fifteen...I'm feeling serene. Fifteen, I need to use the latrine"

As for work, I've had a productive two days. Got out yet another editorial letter, responded to a bunch of LA SCBWI queries (if you haven't heard from me yet, you will! I promise!), helped my assistant with her very first editorial letter, and it's only Tuesday. More to come.

A snarky comment to my Blue Rose Girls "How I edit" post of last Friday was disheartening, and almost made me not want to blog anymore, because now I know there are readers out there who are looking for things to criticize, who are not kind, and that makes me sad. But I know it comes with the territory.

Posted by alvinaling at 5:25 PM

Hey, at least you don't blog about politics!

there are always those out there with a snarky comment. I notice that it was a silly one...with nothing to do with the content of your post. some people just look to be jerks. I figure they must have unsatisying sex lives. I enjoyed your post very much. As someone who is thinking about (and wanting) to break into a tough business it was very helpful and well-written. so I say keep it up!
I can't believe anyone can run that far!!!

I was put off by the snarky comment as well, but you handled it beautifully. And I loved the way the other BRG's chimed in for you. You're a very strong and graceful group of women.

Why are some people so rude?

I have a BA in English with an emphasis in editing and I never edit my blog posts because I figure my family and friends don't care. Now I'm going to be self-conscious about it.

I'm glad that you decided to continue blogging anyway. Your blog is always so interesting, and I often find myself wishing you were my new best friend so I could hear what you have to say all the time.

I know what you mean. Snarky comments just kill me. They can be the mildest criticism and somehow they'll sit in my brain depressing me for days on end. My skin is perhaps too thin to be a blogger, but fortunately the vast majority of kidlit readers are sweeties.

And of course the irony is that I love a good helping of snark. I can dish it out but I apparently cannot take it.

Thanks, all. This was nice!

I know it's so silly, but what kills me is that my mistake ("author's" instead of "authors") was so obviously a typo and not a result of me not knowing the difference between the plural and possessive. I mean...duh! So to have some annoying anonymous person point it out as if it was something I didn't know was a bit infuriating and made me realize that someone actually set out to make me feel bad. That, on top of the fact that the post was specifically one where I wanted to be helpful and give readers the editor's perspective--good to know people enjoyed it!

But I was only annoyed for a bit, and it was nice to have my fellow BRGs get outraged on my behalf. Overall, I think the comments both here and on the BRGs site have been wonderful.

You're right, Fuse--the kidslit community is generaly all warm and fuzzy. I love it.

I run two-word sentences through the Microsoft spellchecker, and wear garlic around my neck when I post.

But maybe I should face my fear head-on and intentionally make at least one mistake per sentence.

Thank yu for chiming in at Fuse #8 and giving an editor's perspective of SCWI. It is most appreciated!

I didn't read it, but it's sad when ppl have to be mean/rude/critical. Please don't quit blogging! I love your blogs!

Although I totally understand how it feels. I had a blog about my adventures in Shanghai and someone made a mean comment (they thought I was complaining - and maybe I was, but it's MY blog) and it hurt my feelings and kind of scared me (since he lived in Shanghai) so i started censoring myself and then, it wasn't as much fun. I haven't posted in months.

I noticed the snarky comment too, and thought it was either A) Incredibly rude and heartless or B) Someone you knew making a joke...You know, editing your post about editing, and you being an editor and all...ha ha.

I'm sorry that it was answer A) but some people scour blogs just to leave mean comments. People leave smarmy comments on my blog all the time, but I just delete those comments, keep the good ones, and pretend that everyone loves me.

Love both of your blogs, so please don't quit!!

You should see some of the snarky things that were written about me (both during Fibs and the Dif Strokes movie!). Now, if my FRIENDS start snarking, that's a different matter entirely, but I firmly believe folks who live to nitpick will end up with a life full of nits. And they're welcome to 'em.

Don't stop. Toss them some nits from time to time and move on. You'll even feel good about it!

A testiclely-challenged dude named anonymous roams around cyberspace being snarky. (BTW, Alvina, the etymology of that word interests me; please share it if you know it). I ignore most of his comments because without the weight of your identity/name behind it, what's your opinion really worth?

I just added a comment in your defense on the Blue Rose Girls blog...your classy answer to the snark spoke volumes. I'm glad to see you're still blogging! :)

The nice thing about it being your blog, you can always delete the snarkies. But it's kind of a lot cooler when you don't.